Today had its ups and downs for sure.  My mixed emotions about leaving so soon definitely hit today, and at times I was not having the best of days.  But looking back on it, it was over ally positive with a couple bumps. 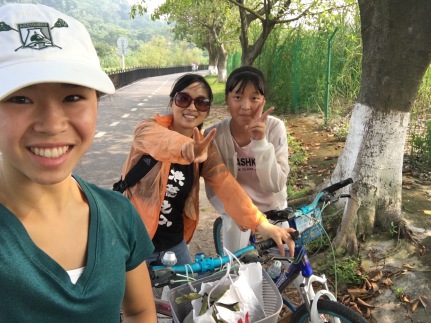 My family on the path!

I was a little annoyed because my family wanted to go mountain biking today so we had to wake up early.  I am definitely starting to feel sleep deprived, as I only get between 6-8 hours each night and do so much each day that I’m so exhausted.  After leaving our apartment, we picked up Katie’s mom and sister (but not Katie) and we’re off on our hour long drive to Zhongshan, a neighboring city.  Parts of the drive over were on gravel and dirt roads and I definitely felt like I was in the middle of nowhere.  When we finally arrived, we rented mountain bikes and were off on a very beautiful and scenic greenway path.

The only major problem with biking today was the heat.  We got on the path around 10am, and the temperature was already about 94° and felt like 110° with the humidity.  To add to this, we were going up and down hills, which was tiring and felt like I was biking through a heated blanket.  I don’t know if it is good or bad, but we stopped about every five minutes for pictures and a break.  A few of them were nice because we got to take some amazing pictures of the mountains and reservoir we were biking around, but at other times I just wanted to keep going so we could leave sooner.  My family is good at biking, but Katie’s family was so slow so we always had to wait for them to catch up.

It was a little scary going down some of the hills, especially because they were steep and curvy.  I felt really bad because Katie’s sister ran into someone, fell off her bike, and scratched up her leg.  A little further down the road, we saw a guy with a severely injured head who was bleeding… not a good idea for the city not to provide helmets.

By the end of the ride, it felt like 120° outside and I was not feeling it any more.  My mom wants to take pictures every two minutes, which is sweet but annoying, and by the end I just sped way ahead of them all and waited at the bike return place for them.

After the ride, my family went back to the Korean barbecue meat place we went on the first weekend.  I really loved the place and thankfully it had air conditioning, so my mood bounced back super quickly.  Back at home, we had a xiuxi for a while and my mom went out to run errands.

Since I don’t like just sitting at home, especially when I know I don’t have much time left for exploring, I texted Lily and she happened to be at Maan with Anthony right then.  I rushed over there and chatted with them for a good hour and a half.  We then walked to the wonton soup place under my house for them to eat dinner.  I had to go home for dinner, which was a nice light soup with sweet, round dumplings in it.

I didn’t know this (because my family is terrible at communicating plans in both Chinese and English) but apparently my family wanted to take me to Maan after dinner.  So my mom knocked on my door and said we were going, so I ready by my sister was being super moody.  It took her about 30 minutes before she finally got up to go (SHE was the reason we were going because she was still hungry, might I add) and when we left the apartment t was clear that she was crying early.  I didn’t want to go to maan because I had already been today (even though I didn’t order anything) and was not hungry and just tired.  So when she was being all moody and honestly just a pain to deal with, I got really fed up and just mad at them for making me go.  I definitely lost my temper (I regret it but I did) and just yelled “我不饿！我不想吃东西!” in maan (“I’m not hungry, I don’t want anything”).  In all, tonight was not a great night for any of us.

I don’t know why I lost my temper today… I think I am just feeling a lot of mixed emotions about leaving.  I definitely miss America and some parts of “normal” life back home, but at the same time cannot bear to think of leaving this place.  Honestly, I can’t even remember what my life back home is like.  All these mixed emotions pent up inside me we’re bound to come out sometime, and while I feel bad that it was at my family I knew it would happen sooner or later.

This blog details Tully Liu's experience with the National Security Language Initiative for Youth (NSLI-Y) program in Zhuhai, China. All ideas are expressed are of Tully and reflect her personal experiences.