Pre Departure Orientation was held at Columbia University in New York City.  While I’ve traveled to NYC many times before, this was my first time ever visiting Columbia.  My parents drove me up to Columbia and dropped me off at the dorms (where we would be staying).  I met Signe, Ligaya, and Nicole, the iEARN-nsliy coordinators, in person for the first time.  Even though this was my first time meeting them in person, it really felt like I’ve met them before because of our constant communications prior to PDO.  After going out to a last lunch with my parents at a small cafe near Columbia, I said goodbye and embarked on my nsliy adventure! 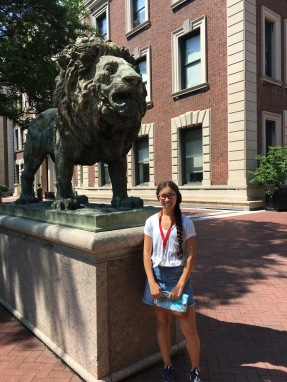 The dorms we stayed in were very simple, clean singles.  I was given standard issue dorm sheets and a blanket, reminding me just how important bringing my own sheets to college will be!  New York City was blazing hot, however stepping into my dorm room felt like I was entering a refrigerator because the air conditioners were blasting.  After I quickly settled into my room, I went outside to try and find some other nsliy scholars who had already arrived.

After a little bit of searching around the campus, I ran into a group of my peers!  I’ve been facebook messaging, WeChatting, and snapchatting a bunch of them for the past couple weeks, however, this was the first time I ever met them in person!  Everyone was very nice and welcoming, and from the get-go, I knew that I would make a lot of friends on this program.  We explored the campus and surrounding areas for a while until an official meet-and-greet began.

Over a casual pizza dinner on the quad, we mingled with each other.  Isabel, our resident director, led us in some fun icebreakers to get to know the other students on our trip.  We also set up a “working agreement” of rules that we agreed to follow while on our trip.

After a long (and emotional) day, we all turned into our dorm rooms kind-of early.  I thought I was so tired I would fall asleep immediately, but the dorm bed made that seemingly easy task impossible.  I was in for a rough night…

This blog details Tully Liu's experience with the National Security Language Initiative for Youth (NSLI-Y) program in Zhuhai, China. All ideas are expressed are of Tully and reflect her personal experiences.